SOPHISTICATED anti-counterfeit and traceability technology is helping to protect the integrity of premium Australian foods in Asia.

Beston Global Food Company, based in Adelaide, South Australia, has developed a two-part platform to protect its products from counterfeiters and is making it available to other Australian exporters.

The first part of platform is an anti-counterfeit aspect, known as Brandlok, that contains spectrum fingerprint technology similar to what is used to prevent currency counterfeiting.

Developed by the Australian Commonwealth Scientific and Industrial Research Organisation (CSIRO) and commercialised by DataDot Technology, Brandlok is the result of a partnership between Beston and DataDot.

The second part of the system is an app-enabled platform called Oziris that traces the origin of the individual ingredients in the product down to the batch level, when the product was made and where, use by dates, and methods and dates of shipping.

Beston, which has employed a closed loop supply chain to expand rapidly into Asia, has been using the technology since February for its own products and opened it up for other Australian food exporters in July.

So far about 300 products are protected by the system – about 60 of Beston’s and 240 from external companies.

Beston Global Food Company Chief Technology Officer Al Jawhari said about 80 per cent of the companies using the system had experienced problems with food counterfeiting in the past.

He said there was nothing else on the market for Australian companies that combined hi-tech anti-counterfeit measures with traceability functions on the one platform. Beston has protected this technology with international patents and patent pending IP.

“This is top end technology, it is extremely sophisticated and even the process of application we only do it here in Australia to make sure the loop is closed,” Jawhari said.

“There are other fingerprint spectrum technologies that can be applied but they can be counterfeited and that’s the critical part.

“We are in a leading position with this platform.”

The Organisation for Economic Co-operation and Development (OECD) says counterfeited and pirated goods account for up to 2.5 per cent of world trade, or as much as $US461 billion, significantly damaging companies and state coffers.

According to a recent report by MarketsandMarkets.com, the market for anti-counterfeit packaging is projected to grow from US$82.05 billion in 2015 to US$153.95 billion by 2020, at an estimated compound annual growth rate of 13.4 per cent.

When a customer chooses a product with the Oziris/Brandlok technology they use the mobile app to scan the seal sticker, which contains spectrum fingerprint technology, to ensure its authenticity. 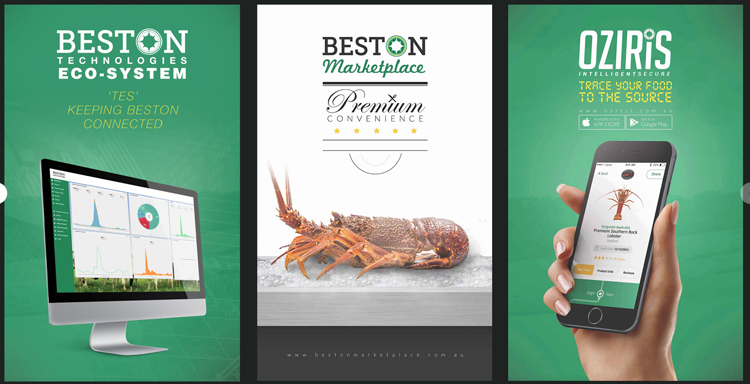 They can then scan the QR code to learn more about the product, such as the source of all ingredients, factory locations, shipping dates and customer reviews.

Beston owns a number of brands across a broad range of premium foods including dairy, seafood, meat and health nutrition.

Jawhari said a brand was almost impossible to recover once it had been damaged through counterfeit.

He said any product that signed up to use the company’s technology could also be sold through Beston’s overseas distribution channels and on its e-commerce platform.

“Our customers need to have 100 per cent peace of mind,” Jawhari said.

“We’re providing the traceability anti-counterfeit technology as well as the e-commerce, the B2B and B2C all in the one platform.

“So the offering is amazing for small to medium producers who have unique products but who don’t have the platform that enables them to export, which is an extreme challenge.

“Any product that is part of the Oziris/Brandlok technology, as long as it has certification, is sold overseas through our distribution channels.”

The app, which runs natively in English and Mandarin, is operational in China, Singapore, Thailand, Vietnam and is hoped to be rolled out in Hong Kong and South Korea by the end of the year.

Jawhari said Asian consumers, particularly in China, were very aware of counterfeit food issues and were happy to use technology to ensure they were getting authentic products.

“We have fulfilment partners in all these cities where we have the technology either at distributor level through supermarkets or directly through the e-commerce platform,” he said.

“This is going to be the leading platform to protect Australian products overseas.

“Our biggest market is China and there is huge potential in the premium produce, which also has the problem with counterfeit – this is where we come in.”

About the Author: Andrew Baker